At “Varna Summer” 60 years ago

Prof. Milко Kоlarov: I have lived with music, with my personal harmony

On this day 25 years in Varna: the final of the International Music Festival “Varna Summer” with Katia Ricciarelli

Criteria are needed for assessment of the qualities of festivals, this is the opinion of the expert Lyubomir Kutin

The Festival Calendar of Varna in 2021

Part of the book "The World of Festivals"

Counting of the festivals in Varna by types over the years 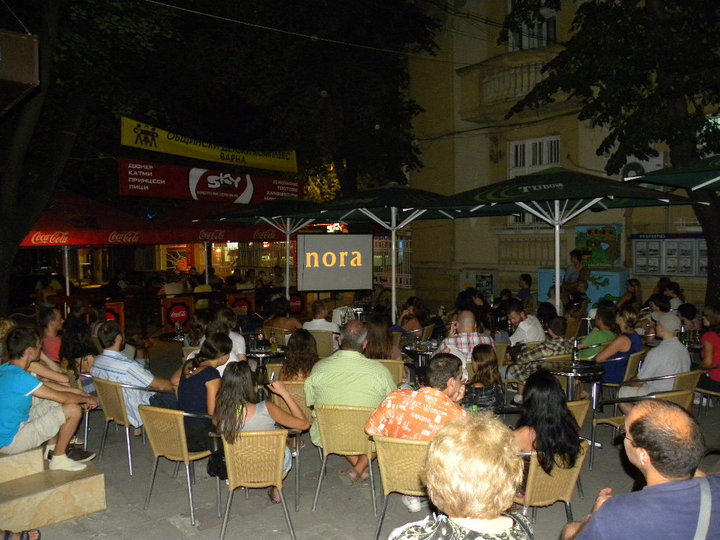 11 July 2013
Summer Theater
G. Verdi – “La traviata”
Varna State Opera Fifteen minutes before the beginning in front of the box office there is a line of five-six people. There are young people, families with small children, adults. Before the performance, the people enjoy commenting on the warm summer evening. No comments on the festivals are heard. The tickets are sold up to five minutes after the beginning of the performance due to the interest of many people who have come at the last moment.
At the entrance there is one person, a volunteer from the festival and one from the staff of the Summer Theater. The audience is miscellaneous: school children, university students, unemployed, musicians and amateurs. Some, while walking in the Sea Garden, have spontaneously decided to visit the spectacle. The stalls are almost full, and the balcony is half-full. Fifteen – twenty percent of the audience are foreigners, predominantly from Russia and Germany.

Ten minutes has passed since the beginning, but there are still people coming in. It is as late as the fifteenth minute after the beginning when the doors are closed. Inside the atmosphere is calm. There are negative comments on the translation from Italian into Bulgarian, discrepancies between the words of the singers and the text, which goes on as a translation.

A large part of the audience has liked the spectacle. After the end people go out smiling, a small part of them is even overexcited. Some of the young look confused and leave silently.

A large part of the audience has liked the spectacle. After the end people go out smiling, a small part of them is even overexcited. Some of the young look confused and leave silently. The adults are fascinated. The musicians look pleased with the way the performance has proceeded, and some say: “Let us hope there will be work for us.” The atmosphere is pleasant, after the end, the larger part of the audience leaves the Sea Garden, a small part of the people stay behind to have some treat or for a walk.

5 August 2013
Gallery Graffit 17.00
Vladiya Mihaylova (Bulgaria) presents
“On the Suspense or How to Hide a Bomb under the Table”
At the entrance, one of the organizers welcomes me and most kindly tells me to wait because the beginning of the lecture will be a bit late. She offers me to have a look at the advertising materials during that time and invites me, if I want to, to sponsor the festival and buy a bag, a T-shirt and a program for 10 leva. Together with this, she explains to me that the festival has a free entry and is trying to raise money in this way.

She informs me that the festival works with five volunteers. She shares with me about the problems too. Despite the fact that the Municipality finances the festival, the City Art Gallery wants a rent for the usage of the attic. Eight days before the beginning of the festival, from the Regional History Museu , which had promised to them to use the summer stage, surprised them that another festival was going to be held there. A way out of the difficult situation they found at the last moment, but at the price of compromises and changes of the places for the festival events. There is almost no dialogue between the municipal institutions and the directorate. Still, the organizers are grateful to the Directorate “Culture” which has helped with what they could.

The lecture begins. The lighting of the hall is not turned off for some technical reasons or lack of professionalism. The seats are taken by about twelve people, and eight-nine of them are foreigners (participants or friends of participants).

The lecture is in English. One of the volunteers was translating for one of the visitors in Bulgarian. The atmosphere is calm, the audience is connected with the video art and is composed of young people mainly.

6 August 2013
City Art Gallery
Closing
In front of the gallery, one can spot some of the regular visitors. Two youngsters of about 20 years of age are having a conversation, related to the filming of a certain scene. The atmosphere is pleasant while I am having an informative conversation with one of the organizers. He shares with me that the means from the Municipality have hardly been enough to cover the accommodation and the fees of the jury and special guests. The participants in the festival are mainly from China and japan or their countrymen who have immigrated to Europe.

The beginning is late because they are waiting for the arrival of some members of the jury. In the hall there are about 40 people, 80% of whom are young people up to the age of 30. 10% are up to 50 and the rest 10% are over 50. Roughly, the hall is 20% full, the larger part of the present are participants in the festival, volunteers, last-year participants and winners. The films are short, but complex and difficult to understand.

During the closing statements, the organizers declare that they would like that the festivals should continue its existence in the “underground” circles. Finally, joking and laughing they express their wishes to see one another next year again. The atmosphere is pleasant and calm, all leave without trying to explain or comment on the event that has just ended.

International festival “World Forum of the Arts – Toward the Stars”

The English court in the Museum is full of visitors. There are even 20 people standing. The Sound amplifiers hamper the side seats from having visibility of the stage. The evening begins with the announcing of a mono-spectacle in Czech, which is not in the program. Some discontent is heard. The action of the declared out-of-the-program spectacle takes place on the ground of the stage. A very small part of the audience can see what is happening. During the longer part of the first spectacle the audience does not follow the actions, but are talking to one another. In 30 minutes the performance ends. Someone is awarded, but no one knows why.

With his very appearance, Mamalev makes the audience laugh. The audience is listening and responding to his lines with stormy laughter. Georgi Mamalev is telling funny anecdotes, talking about his life, about politics and the future of our country, always joking. He also comments on the daily life, way of life, telephone operators, doctors, the historic heritage. The audience is having fun during all the time and sends him off warmly and with ovations. After the performance Mamalev stays behind to talk with part of the people. He is still joking and laughing.