Week of the Orthodox Book

The week of the Orthodox Book is after the initiative of the Metropolitan Archdiocese of Varna and Veliki Preslav and with the support of the Varna Municipality. The aim of the organizers is to popularize the achievements of writers, translators and book publishers who are engaged with the themes, related to the values of the Eastern Orthodox Christian culture.

The program consists of theological conferences, seminars, exhibitions, concerts, pilgrimages, presentation of feature and documentary films of Christian themes and topics. The Forum discusses topical issues of our contemporary life, related to the spiritual life of the modern person.

The events are in the temples of Varna, the Spiritual and Educational Center “St Archangel Michael” and in the Varna Municipality. 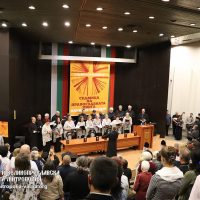