National Festival of the Ethnic Groups BULGARIA FOR ALL

The basic organizer of the Festival is the People’s Community Center “Hristo Botev – 1928”. The aim of the organizers is to inform the public, to enrich and popularize the musical and dance folklore of the ethnic groups in Bulgaria.

It is held in the Summer Theater – Varna, and part of the accompanying events are on the Stage “Conch” in the Sea Garden and in the city trade centers. 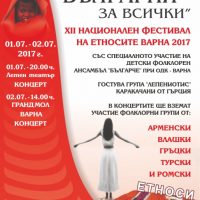